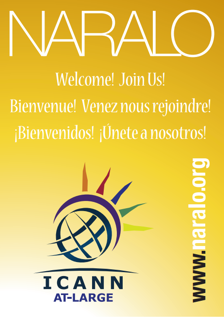 On 12 June 2017, the North American Regional At-Large Organization (NARALO) is celebrating its tenth year anniversary of the signing of the Memorandum of Understanding (MoU) with the Internet Corporation for Assigned Names and Numbers (ICANN). The signing of MoU simbolizes the establishment of NARALO within the ICANN multstakeholder community ecosystem.

During this past decade, NARALO has grown from 10 to 29 At-Large Structures (ALSes) and 19 unaffiliated members. Its membership has extensive knowledge on Internet issues relevant to end users, ranging from community access to cybersecurity issues.

“Over the past ten years, many of our members have been leaders in the ICANN ecosystem, providing thought provoking policy statements on topics such as consumer trust and more.” said Glenn McKnight, the NARALO Chair.

As the Internet becomes more prevalent in people’s lives, we at NARALO aim to reach out and help end users to engage with key decision makers in making the Internet an open, trustworthy, and invaluable community asset.

“I am proud of NARALO for having been able to raise the awareness among our constituencies about policies and issues discussed in ICANN that affect end user communities and shape the global Internet.”  said Eduardo Diaz, President of Internet Society Puerto Rico Charpter, one of the original signatories on the MoU and the incoming NARALO Chair.